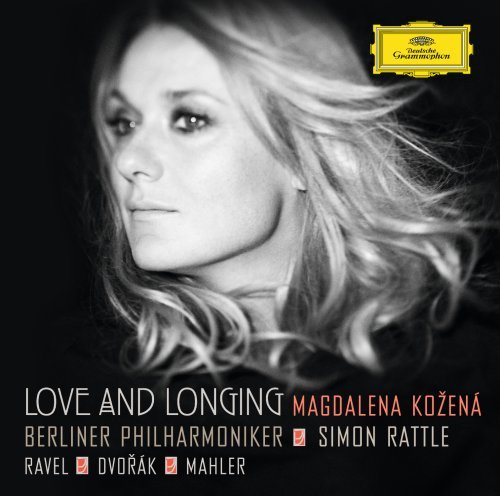 “I am dead to the bustle of the world

And repose in tranquil realms.

I live alone in my heaven,

In my devotion, in my song.”

When mezzo-soprano Magdalena Kožená sang those words a few weeks ago at Walt Disney Concert Hall, 2,000 people collectively held their breath. Spines tingled. Goosebumps abounded. Kožená was performing the Rückert-Lieder by Gustav Mahler with the LA Philharmonic, conducted by her husband, Sir Simon Rattle—a concert you can hear on Classical KUSC June 24 and stream on-demand at KUSC.org June 24-July 1.

Before that concert, Kožená, Rattle, and the Berlin Philharmonic (Rattle’s band now for more than a decade) recorded the Rückert-Lieder in concert at the Philharmonie. The cycle is unquestionably the star of this new recording from Deutsche Grammophon. Kožená’s silky, warm tone—which always seems to exhibit just the right balance of power and nuance—is perfectly suited to Mahler’s nostalgic, but not overly sweet score. The final song (quoted above), Ich bin der Welt abhanden gekommen, is a showcase for the range of expressivity available to Kožená, who uses vibrato sparingly and to ravishing effect. You’ll hear moments from Mahler’s Fifth Symphony in the orchestra. I dare you to listen and not cry.

Equally as arresting, is Magdalena Kožená and the Berliners’ performance of Maurice Ravel’s song cycle after poems of Tristan Klingsor, Shéhérazade. The climax of the first song Asie is a thrilling reminder of what a great Ravel orchestra the Berlin Philharmonic is. I will go to my grave arguing that their recording of Daphnis et Chloé and La Valse with Pierre Boulez (DG 447 057) is the best ever made. In the third song, L’Indifférent, Kožená is anything but. She’s sultry, seductive, and sexy. Exactly what Ravel’s music and Klingsor’s words demand.

This recording opens with the Biblické písně (Biblical Songs), Op. 99, by Antonín Dvořák. Not by any means a collection of the composer’s greatest works, but the Czech-born Kožená manages to make this music of her homeland compelling. It is charming enough. The Mahler and Ravel works, however, are downright dazzling.