The Urban Dictionary definition is as follows:

goat rodeo (noun): 1. A chaotic situation, often one that involves several people, each with a different agenda/vision/perception of what’s going on.

Cellist Yo-Yo Ma’s definition is a little bit different: “If there were forks in the road and each time there was a fork, the right decision was made, then you get to a goat rodeo.” It’s a proposition that is equal parts skill, logic, and luck. The Goat Rodeo Sessions is an album from a quartet of world-class musicians that tests the limits of all three of these elements. 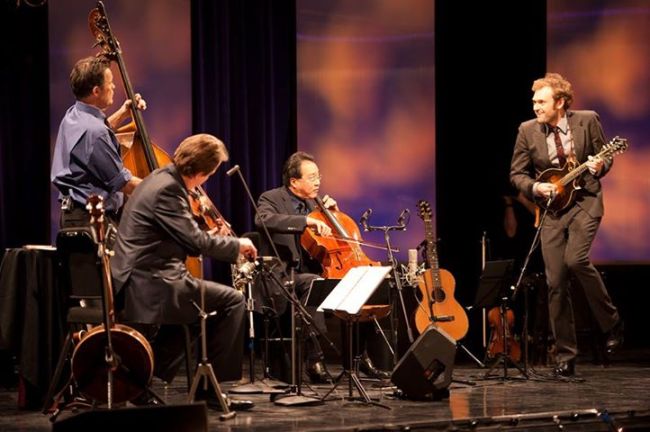 As if heading into a recording studio and rolling tape on this chance-based experiment wasn’t dangerous enough, Yo-Ya Ma, Chris Thile, Edgar Meyer, and Stuart Duncan have taken the show on the road and are doing it live. They’ll be at the Hollywood Bowl Sunday night.

Recently, I caught up with Yo-Yo Ma to ask him about this idea of music that comes together against all odds, taking risks on stage, and trying new musical things. You can listen to the conversation here, read the transcript below, or catch the radio feature Saturday at 8a on KUSC’s Arts Alive. 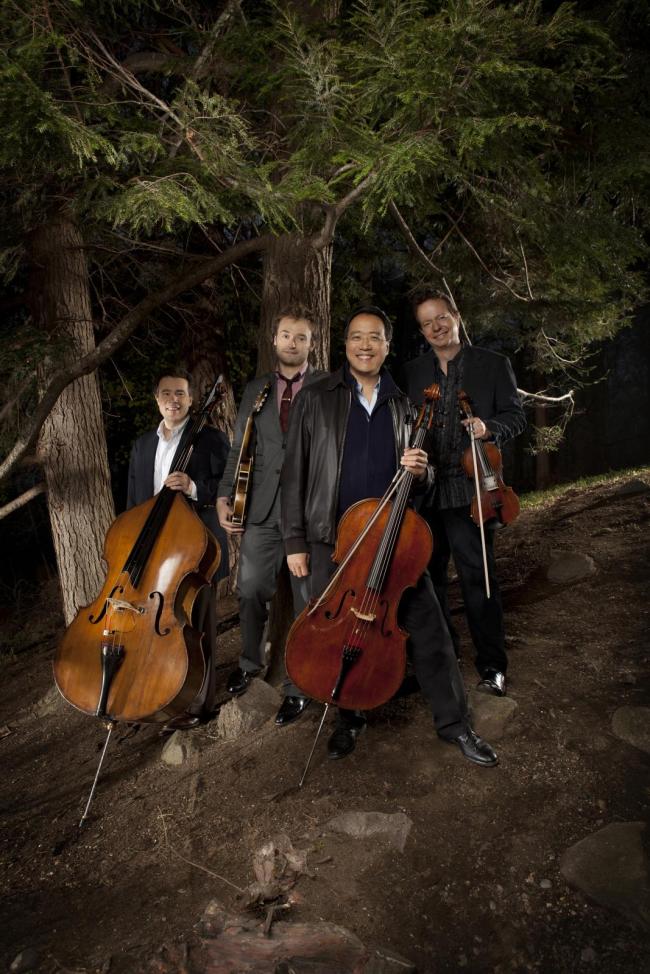 BL: I’d like to start with something that Chris Thile told me a while ago. He likes to talk about how there should be no genre distinctions in music: he uses the terms “formal” and “informal,” meaning formal music is written down; informal music is not written down. How do you feel about that? Are genres helpful?

YYM: I think that is a very interesting question. In order to learn, we have to make categories–“I like this; I don’t like this”–but in order to keep learning, you actually have to take away the categories and form new ones. So it is a constant process. In order to evolve we must constantly change categories. Even in the digital age we need categories too because if you’re looking for something, where are you going to look? But when you are living life, and you’re experiencing something, at the moment of experience, it’s a totality of of everything. So, I think that’s what Chris is talking about. When you’re falling in love, you’re not saying, “I’ve always liked brunettes.” You don’t think that. At certain moments when you’re using all of yourself and when an experience is all-encompassing, it’s actually not healthy to have categories.

BL: In The Goat Rodeo Sessions, how much of the music is written down? How much is left to chance, if that’s the right word?

YYM: It’s hard to say, because at any moment anybody can do anything. But, you also all know that there is a structure there. Stuart might have one line of music, I would have more music, and Edgar and Chris would have very little music. But they’re all operating from a similar structure–an agreed-upon thing. And at any moment–either by pre-agreement, or by a sign, or by deliberate willfulness–each one of us can try something different. That’s an evolution and that’s going to change from day to day.

BL: Sort of a balance between a healthy dose of chaos and making good decisions musically.

YYM: And coming to a safe landing. So there’s enough trust that we could take risks together, that in the course of our journey of collaborating, being flexible with each other, being imaginative in our work, and innovating it into something kind of new and fun or funky or original or playful or wondrous or whatever the innovation goal is. We want to get to a place where people who are listening have a good time, get it, and feel those values at work. And maybe with a hint of mystery to it: saying, “Gosh, you know, they’re having so much fun.” They seem to not only be good at what they’re doing (hopefully), but that there is something special that comes across. And if they like that, then they take the thing that they have received–maybe it’s a sense of joy, maybe it’s a sense of innovation, maybe it’s something like, “I heard so many different kinds of music there, but it all makes sense. This is the way I’d like to do that in my work at the office.” Or, “I wish my school were like that.” So, if the audience can connect from that moment to anything else that happens to them in their life, then we have done our job.

BL: I think that’s an important aspect of music to bring up. So often–and this is a pitfall of classical music in particular–it lives in the concert hall. You go to the concert hall and you have that experience and then it exists in that space, I don’t want to say “in a vacuum,” but it touches you in a specific moment and then you move on.

YYM: Absolutely. A lot of your listeners are probably tourists someplace. Let’s say you go to Paris. You spend three days in Paris and then you say, “Okay, I did Paris.” You come home, you have your pictures and you don’t talk about it anymore. Or, you could say you’ve experienced certain things and then you try to replicate, you know, how do you make bread like you had in Paris? Or, “Gee, there’s a goat farm next to my town. I’m going to try to make goat cheese, because I experienced that in Paris. I suppose I could put dill in it and maybe that’s going to be fantastic!” So, connecting an experience to something in your everyday life, that’s what culture is about. It’s about an evolution of a set of habits, of likes, of preferences, and choices that somehow connect to the next individual.

BL: I wanted to ask you about your work with the Chicago Symphony. In a way, you’re working as a musical activist: music making communities better. What role does music play in going into our cities here in America that are challenged by crime and poverty, and where kids don’t have access to the best educational resources? How does music help those situations?

YYM: For one thing, music puts you into a state of mind. Music actually can not only regulate your state of mind, but also when you know a state of mind works, it actually can regulate all the other things in your life. It can signal when things are right or wrong or not quite in a good place. For incarcerated youth and certainly kids growing up, when they’re sharing music files and listening to each other’s music, all of these exchanges put people into certain states of mind, of focus. And people participate in music, I think, who are writing songs or poems and setting them to music. It identifies their voice, who they are, and how they fit, in a larger context. … That’s the basis of creativity. Layering one reality on top of another is what imagination is all about. Collaboration, flexibility, imagination, and ultimately innovation are values that are built into someone’s view of the world. That’s what we try to do on stage with Goat Rodeo; that’s what we try to do working with the Chicago Symphony Orchestra. For young people, instead of thinking about, “Am I going to get a job as a musician,” looking at where in society you might be needed and respond to those needs. Part of creativity is thinking about, figuring out, being comfortable, and accepting of all the things we don’t know, and not feeling that you have to know everything. Because that’s when you start to explore, that’s when you start to wonder, and that’s when you become a citizen.

BL: As we wrap up, can you give me any sort of a hint about what might be in store for the LA Philharmonic season-opening gala next month at Walt Disney Concert Hall?

YYM: It’s going to be a celebration of this unbelievable organization that has two amazing homes: the 10th anniversary of Disney Hall (one of the great halls ever) and the Hollywood Bowl. And both of these venues are there truly to serve everybody. Through what the LA Phil, Gustavo, what El Sistema does within the community, of saying that music is there because it was well-invented. And when something is well-invented it is in fact for everybody. The fact that the LA Phil practices that in its mission–in all that it does–is fantastic. So, we’re going to celebrate that. I can’t wait to play with the Phil again and with Gustavo, who is an inspiration to me and what’s even more, I’m so looking forward to having lots of conversations with him because I’m so interested in what El Sistema does around the country in so many different places.

BL: Thank you so much. I appreciate your time.

YYM: Thank you. It’s great to talk with you.

One thought on “Yo-Yo Ma: “Part of creativity is accepting all the things we don’t know, because that’s when you start to explore.””