It was a festive atmosphere inside and outside Walt Disney Concert Hall on Thursday as the LA Phil unveiled plans (and a new logo) for its 100th anniversary. The actual date of the first concert by the LA Phil was October 24, 1919, so technically the orchestra’s birthday is still nearly two years away. However, the performing arts world works several seasons in advance, and the 2018-19 season is the orchestra’s 100th season, so it’ll be here before we know it.

How does an orchestra, which has a worldwide reputation for forward-thinking innovation, celebrate the past? By looking toward the future. In fact, the presentation began with a world premiere of a fanfare for solo trumpet by Los Angeles-based composer Andrew Norman, performed by LA Phil principal trumpet Thomas Hooten.

The @laphil presented a world premiere at their 100th anniversary kickoff event yesterday, because they’re the LA Phil and of course they did. (Principal trumpet @tomhooten playing “New Work” by Andrew Norman.) #LAPhil100

We’ve gotten used to artistic innovation from the LA Phil, so it’s difficult for them to surprise us in that realm. This event surprised. The 100th anniversary season will include 50 commissions. Gustavo Dudamel called it “the most ambitious 12 months in the history of the orchestra” and that “practically every program will have something new” on it. 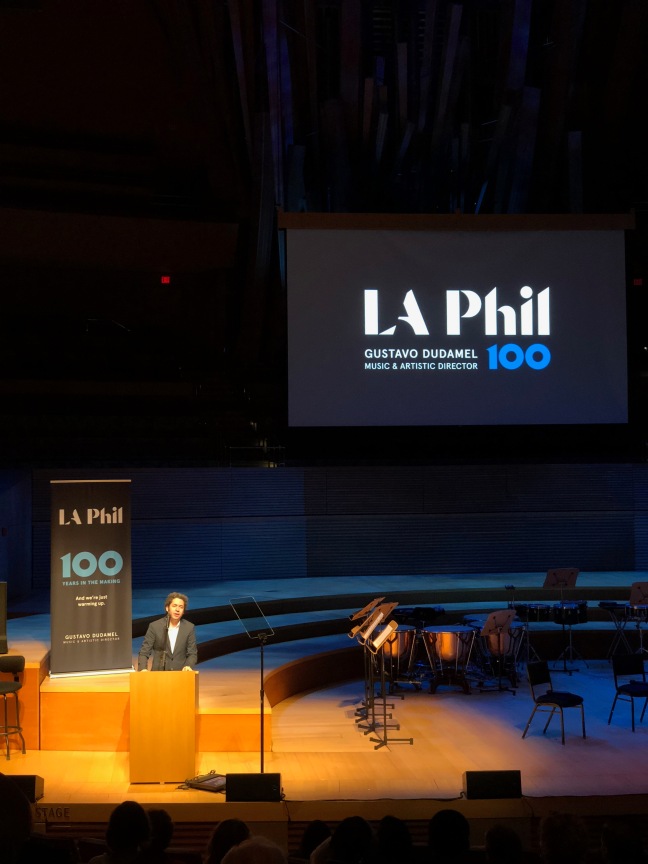 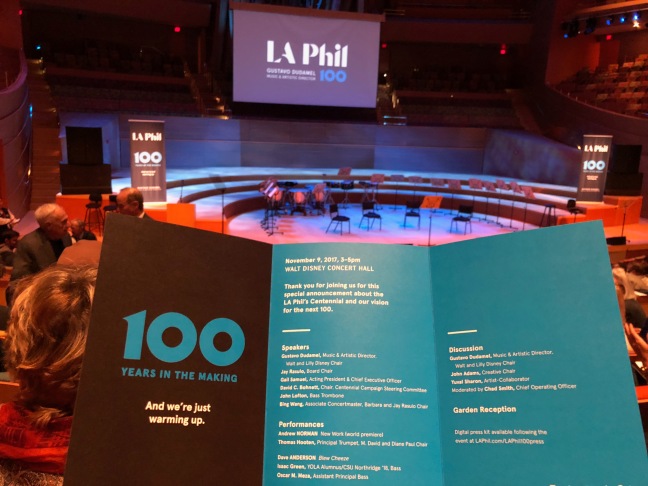 Another big initiative for the 100th anniversary is a huge expansion of Youth Orchestra Los Angeles, an El Sistema-inspired partnership among the LA Phil, Heart of Los Angeles, Expo Center, Harmony Project, and LACHSA. The LA Phil announced a commitment to doubling the size of YOLA in the next four years and building a new YOLA center in Inglewood, designed by Frank Gehry. The commitment to the future of classical music deepens.

A third major initiative announced at the LA Phil’s 100th anniversary season kickoff was a musician-led effort to create a fellowship program for young musicians from underserved and underprivileged communities. That the LA Phil musicians looked around the orchestra (and other US orchestras) and asked the question, “Is our orchestra a reflection of the city it represents?” is incredible. That they recognized the answer to that question is “no” and committed to changing that fact starting immediately is admirable. (Applications are already being accepted.)

Classical music is for everyone and kudos to the musicians of the LA Phil for creating an initiative that will help realize the dream of becoming a classical musician for individuals who might not otherwise dare to dream.

The program wrapped up with Gustavo Dudamel conducting members of the LA Phil brass and percussion sections in the Fanfare for Los Angeles Philharmonic, written for the orchestra by the Polish composer Witold Lutosławski.

Then, we all headed out into the Walt Disney Concert Hall garden for a toast, cake, and because this is the LA Phil…a performance of a Fluxus piece by Yoko Ono, called “Voice Piece for Soprano” from her 1964 artist’s book Grapefruit. Christopher Rountree, frequent LA Phil collaborator and also the founder of the modern music collective wildUp, led the performance.

Only at the LA Phil…

One thought on “LA Phil at 100: Celebrating the Past by Looking to the Future”