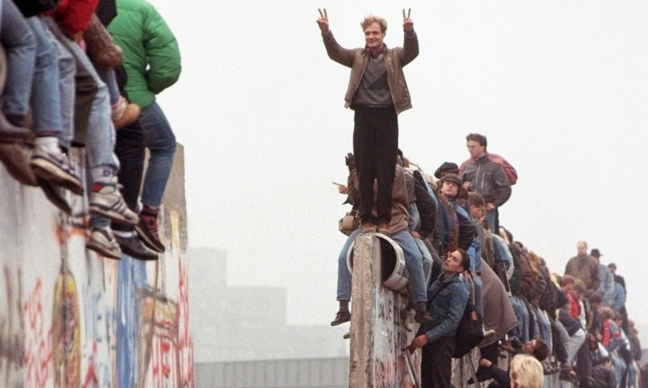 I was seven years old when the Berlin Wall came down. It was one of the first world events I remember. My parents, sister, and I gathered around our TV and watched the fuzzy images stream into our living room. I didn’t fully grasp the enormity of the moment, but I knew something big was happening.

Four years later, I would visit Berlin for the first time. Various museums had already sprouted up, telling the story of a divided Berlin. Sections of The Wall remained positioned around the city; people could walk right up to it, take a few swings, and bring a hunk of The Wall home with them as a souvenir. (Looking back, I’m sure this was probably frowned upon, but it’s something that literally everyone was doing. And I like the poetry of that: leaving a portion of the thing that represented oppression and violence in place and quietly looking the other way as citizens and tourists alike chip away at it for years.)

Conductor Daniel Barenboim happened to be in Berlin in November 1989, recording with the Berlin Philharmonic, when The Wall came down. Here’s how he described the scene that weekend:

“When I came to the recording studio on Friday 10 November I discussed with the musicians, who were in a highly excitable state, what we could do to mark the event. We planned a free concert on the Sunday evening exclusively for the citizens of East Germany, of Beethoven’s 7th, a purely practical decision because we’d been practicing it for the recording.

“There were no tickets, they just had to show their GDR ID cards. People were queuing outside from 4am in a line that stretched around the building. …

“After the concert I sat in my dressing room, and a woman came to the door accompanied by a young man, with a bouquet of flowers … she came up to me shaking and gave me the bouquet and thanked me profusely, saying the Berlin Wall had separated her from her son (the man with her) and that they had been reunited again just the evening before for the first time in almost three decades. I was moved to tears by her story and told the woman she could always reach me and I’d invite her to a concert.”

That “Concert for the Citizens of the GDR” was filmed and the Berlin Philharmonic recently made it available in the orchestra’s Digital Concert Hall. I was hoping the orchestra would offer the concert free of charge during this weekend of the 25th anniversary of the falling of The Wall, but it doesn’t look like they will. Still, less than 10 Euros gets you a week’s pass to the DCH…and you can watch the trailer for free…and the Berlin Phil has put the final two minutes of the concert on YouTube. (The cheers of the audience get me every time.)

You can also watch an interview with Daniel Barenboim about the concert.

On Christmas Day, 1989, in the former East Berlin, another grand performance of a Beethoven Symphony took place. This time it was an ensemble made up of musicians from six different orchestras, conducted by Leonard Bernstein. In the final movement, Bernstein asked the chorus to sing the word “Freiheit” (freedom) in place of “Freude” (joy). That entire concert is available here:

And it was the legendary Russian cellist, Mstislav Rostropovich–who was such a courageous champion of Soviet-era dissidents–who brought his cello to the crumbling Berlin Wall, and played Bach, triumphantly and “from the heart.”