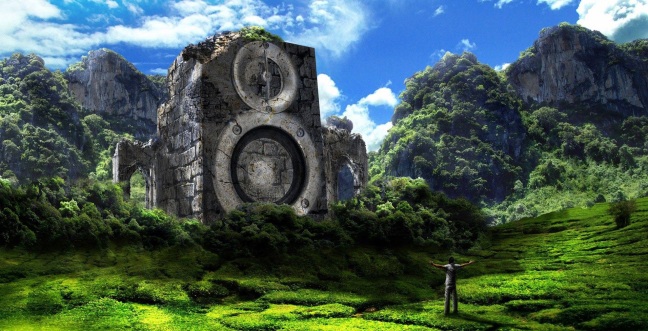 Welcome to a new periodic feature on the blog, where I will be asking musicians, writers about music, composers, and all manner of musically-connected people to share a few (oh, say, five) pieces of music that happen to be on high-rotation in their playlists. The musical world is vast. We will never be able to listen to it all. But the act of sharing what inspires us, makes us weep, or helps us escape is a beautiful act of community.

1. Ravel: Sunrise, from Daphnis et Chloé – Of all the depictions of sunrise in classical music (and there are many), this is by far my favorite. I’m rarely finicky about my suspended cymbal interpretations, but in this particular piece, only this recording with the Berlin Philharmonic and Pierre Boulez will do. Sorry, everyone else. Make them hit it harder.

2. Baths: Apologetic Shoulder Blades – A few nights ago, my wife and I had some friends over for dinner. We played a game of word association to make the evening’s playlist. Four people; four rounds. The 16 words we generated became the search terms for songs or artists, from which I built a playlist without previewing any of the songs. One of the words was “shoulder.” (Don’t ask.) From that, came our introduction to a fellow from Tarzana named Will Wiesenfeld, who goes by the stage name of Baths. None of us knew his music. All of us liked it. #MusicDiscovery!

3. Valentin Silvestrov: The Messenger – With a mix of sadness, horror, and inspiration for the power of the human spirit, I have been following the demonstrations in Ukraine. As violence ramped up in recent weeks, I found myself turning to the immensely peaceful music of Ukrainian composer Valentin Silvestrov. An emotional juxtaposition, to be sure. This is one of Silvestrov’s best-known works–a Mozartian mix of haunting, halting, almost uncomfortable phrases and pauses. And, oh so beautiful.

4. Beady Eye: Flick of the Finger – This is angrier protest music. And damned if it doesn’t get me fired up.

5. Alexander Scriabin: Le Poème de l’extase – The Canadian ice dancing team of Tessa Virtue and Scott Moir (yes, I watched ice dancing during the Olympics, what of it?) choreographed a routine to what was billed at Glazunov’s The Seasons. That was ostensibly true, however, there were a couple of other pieces of music that were cut in to the music, including 3-4 measures of the Tchaikovsky Piano Concerto No. 1 in the middle of the dance and, at the end, the closing moments of Alexander Scriabin’s Piano Concerto in f-sharp minor. Glazukovbin? Scrikovunov? Whatever. But that got me re-listening to Scriabin’s music, of which I’m a pretty big fan. The Piano Concerto, by the way, is great. As are the symphonies. However, I always find myself coming back to this suitable-for-blasting Poem of Ecstacy, which Henry Miller once described as “a bath of ice, cocaine, and rainbows.” He might think that; I couldn’t possibly comment.

One thought on “5 Things I’m Listening to Right Now”