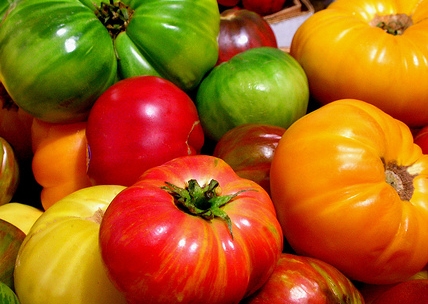 Like the best summer tomatoes, Thursday night’s LA Philharmonic concert at the Hollywood Bowl was one to savor. Of the six performances conducted by Gustavo Dudamel at the Bowl this year, this was certainly the musician’s concert of the bunch. No superstar soloists, like Yo-Yo Ma or Plácido Domingo, and a 12-tone piano concerto to boot.

Still, 6,523 brave souls schlepped out to the Bowl on a steamy night (well, steamy by Southern California standards) to hear what they could hear.

The concert was part of Dudamel’s ongoing Americas and Americans festival. Inaugurated in his first season as music director, Americas and Americans focuses on the relationships among composers of the North, Central, and South American continent. I say “continent” singular, because that’s how Dudamel defines this landmass that’s separated only by a man-made trench. “We are one America,” he told me back in that first season. And he’s out to prove that through music. He rarely refers to composers by their nationalities, preferring instead to call them all “American.”

The program opened with music by the Venezuelan composer Juan Carlos Núñez (b. 1947). As Dudamel told us in his opening remarks, Núñez’s Toccata Sinfónica No. 1 is a staple of the repertoire of El Sistema orchestras in Venezuela. And if Dudamel’s goal is indeed to highlight the stylistic similarities in the music of North and South American composers, he truly hit the mark with this programming choice. A flashy, rhythmic showpiece, the open harmonies of the Toccata conjured up Copland’s aesthetic. 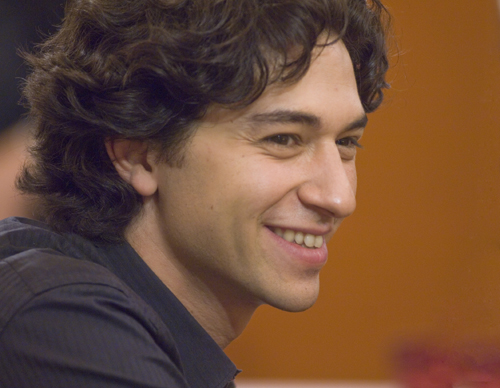 Pianist Sergio Tiempo took the stage next for the rarely-performed Piano Concerto No. 1 by Alberto Ginastera. The other day when I asked Dudamel why the work saw so few performances, he said the answer was simple: “Because it is very difficult!” Turns out the concerto doesn’t try to mask its fiendishness either.

The opening movement, Cadenza and Variations, erupts with a series of cascading outbursts from the soloist, followed by 10 variations and a coda.

The second movement, Scherzo allucinante (hallucinatory scherzo), emphasized the opposite dynamic extreme. Mostly pianissimo, it called for just about every special effect possible from the strings: col legno (playing with the back of the bow), ponticello (playing as close to the bridge as possible), glissando (sliding from one note to the next), false harmonics (putting two fingers on one string, but not pressing down while bowing). It all added up to a sound I call whimsically terrifying. (A compliment, by the way.)

The meditative third movement, Adagissimo, paid a brief homage to the slow movement of Beethoven’s Fourth Piano Concerto. And then there was the finale. Toccata concertata. A relentless, driving tour de force for which Tiempo unleashed his dazzling technique. He has virtuosity in reserve. And the 40-year-old Tiempo, who was performing this concerto for only the second time in his career, was absolutely spellbinding. Clearly he was working hard, his foot stamping incessantly throughout the concerto and as he nailed the last run he leapt to his feet with a look on his face that was a mix of exuberance and relief. The two mop-topped Venezuelans, Tiempo and Dudamel, embraced at center stage as the audience at the Hollywood Bowl let a full-throated cheer.

This is not typical Hollywood Bowl fare. In fact, as startlingly well as it came off the other night, the concerto doesn’t really work that well at the Bowl. Sure, the virtuosity is effective. The final movement is a definite crowd-pleaser. And Tiempo had us eating out of his hand. But the subtleties of color and special effects from the strings and percussion, particularly in the second movement, were largely lost among the crickets, microphones, wine bottles, and light aircraft. As exciting as this performance was, I can’t help but wish that it had taken place a few months later, at Disney Hall. No music by Ginastera is scheduled for the 2012-13 LA Phil winter season, but fortunately, with Gustavo Dudamel as music director that won’t likely be the norm.

The concert concluded with the Symphony No. 3, by Aaron Copland. If the goal of the Americas and Americans festival is to highlight the interconnectedness of the music of our continents, this symphony is the perfect choice. Copland, the so-called Dean of American composers and the one-time teacher of Alberto Ginastera, began work on this symphony in 1944 in the Mexican village of Tepoztlán, about an hour south of Mexico City. He completed the work a couple years later in New Hampshire, with the Boston Symphony and Serge Koussevitzky giving the world premiere.

An expansive, but restrained opening movement leads us to a jaunty scherzo, with the crisp string rhythms punctuated with sharp attacks on the snare drum. The Philharmonic strings were in superb ensemble here, exuding a welcome spirit of chamber music in their playing.

The meandering slow movement meandered on a few minutes too long–was it a tempo problem or lax editing from the composer? Perhaps a bit of both. The thrilling, if propagandizing, final movement, which incorporates Copland’s Fanfare for the Common Man, was appropriately bombastic.

To me, Copland’s Third Symphony is a collection of good musical ideas. It is not a masterpiece. Still, this was one of the most enjoyable concerts of the summer at the Hollywood Bowl–yes, a night to savor.

-Not everyone at the Bowl was thrilled with the Ginastera Piano Concerto No. 1. As my wife and I stood and cheered, our neighbors in the box next to us muttered something about Ginastera perhaps succumbing to “a bad batch of crack.”

-Much love to the busy percussion section, led by Raynor Carroll. They had their hands full in this concert and handled everything deftly. Joseph Pereira was excellent, as usual, on the timpani. And outgoing principal trumpeter Donald Green had an impressive night as well.

-I indeed found this a concert to savor. Others at the Bowl found it a concert to bottle for future consumption. iPhones recording video abounded, as did ambivalent ushers. But, like those good summer tomatoes, once you start the canning process, the magic is pretty much lost. (I’ll refrain from mounting my soapbox about how we as a society don’t actually ever fully experience the ephemeral anymore because we’re always too busy photographing or videotaping it. That’s a rant for another time.)

-If you missed this concert…or are disappointed in the graininess and sonic infidelity of your illegal iPhone video of this concert, you can hear it on Classical KUSC, September 15th at 2:00p. Streamable on-demand here from September 15-22.

-I had the hardest time choosing the wine pairing for this concert. An Argentinian Malbec to go with the Ginastera? A classic New World Cabernet for the Copland symphony? In the end, I went with a Sangiovese from Santa Barbara’s Carr Winery. A unification of an Old World grape with New World winemaking tradition. As with most bottles from Carr, it was perfect. And, as a bonus, I was duly rewarded in the Twitterverse.

6 thoughts on “Gustavo is America and You Can Too”